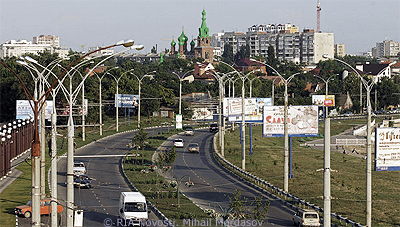 (Bloomberg – bloomberg.com – Ilya Khrennikov – November 20, 2014) It’s a hot day in Krasnodar, deep in southern Russia. The action is hot on the soccer field, too. Ari, the local club’s Brazilian striker, takes a pass from the left flank and scores a beautiful goal. Ari (full name Ariclenes da Silva Ferreira) then wheels away in celebration to the edge of the pitch, yanking up his jersey to reveal a message on his undershirt: “Happy birthday, Sergey Galitskiy!”

The player got a yellow card for unsporting behavior, but the club’s billionaire owner — Russia’s eighth-richest person, celebrating his 47th birthday in the stadium’s executive box — could hardly have been more pleased. “I am overwhelmed with emotions,” he wrote on his Twitter feed later in the day. “Could it have been a better birthday?”

The record shows that on Aug. 14 FC Krasnodar beat Spartak Moscow 4-0. But the score line was about more than soccer, Bloomberg Markets magazine will report in its December issue. Galitskiy’s team, from a city of fewer than 1 million people 150 kilometers (93 miles) from the Black Sea, had trounced a big, metropolitan club, a nine-time Russian champion. Spartak is owned by Leonid Fedun, who was worth $4.4 billion as of Sept. 26. A former Soviet Army officer, Fedun in the 1990s oversaw the privatization of what became OAO Lukoil (LKOD), Russia’s second-largest oil producer.

Once again in his storied rise to become Russia’s biggest retailer, Galitskiy had proved to himself and the wider public that he, a self-made billionaire from the Russian hinterland, could more than compete with the country’s richest industrialists.

He stands out because he’s not among the Moscow-based oligarchs who made their fortunes by using government ties to buy state oil refineries and metals plants at bargain prices in the 1990s. Nor is he among those who amassed their fortunes as friends and associates of Russian President Vladimir Putin.

Galitskiy, who was worth $12.3 billion as of Sept. 26, is the founder and largest shareholder of OAO Magnit. (MGNT) He started out in the business with a single store, called Tander, on Uralskaya Street in Krasnodar. At the end of September, Magnit had 9,020 stores scattered across Russia. With more than 240,000 employees, Magnit (Russian for magnet) is the country’s largest nonstate employer.

Magnit has emerged largely unscathed from the geopolitical quarrel over the revolution in Ukraine. After the U.S. and the European Union denounced what they saw as Russian intervention in the former Soviet state and imposed sanctions designed to penalize Putin, the Russian president retaliated in August with a ban against U.S. and EU food imports.

Magnit, whose revenue has doubled and market value tripled during the past three years, imports from EU member states 3 to 8 percent of the goods it sells, depending on the time of year. While that meant Galitskiy had to turn to suppliers in Turkey, Serbia and other non-EU states, Magnit’s revenue in September increased 34 percent over the previous year amid surging food prices.

Galitskiy has never been one to criticize the government or engage in politics.

“When it comes to politics, I sit down on a sofa and grab some popcorn — or sometimes I crouch down in order not to get shot,” a jocular Galitskiy told the website sports.ru in August.

With tensions in the Kremlin, the White House and beyond running high over sanctions, Galitskiy has kept a particularly low profile, declining to be interviewed for this story, for example.

Admirers often speak of Galitskiy as a Russian version of the late Sam Walton, who started out with a small shop in Arkansas in the American South and built Wal-Mart Stores Inc. into the world’s biggest retailer.

“Both are strong leaders, very focused on day-to-day operations,” says David Ferguson, a Moscow-based analyst at Renaissance Capital Ltd., “and they built models that worked very well for their countries.”

Galitskiy, who displays an acerbic wit in interviews when he gives them, says his aspirations are in some ways different from those of the parsimonious former newspaper boy he’s compared with.

“Walton earned a fortune but was driving a used car,” he told Bloomberg News in 2012. “I feel suspicious about such people. When you make money, it’s natural to enjoy all the benefits it offers.”

By that measure, Galitskiy must be having fun.

Not long before the 2006 Magnit initial public offering that established him as a billionaire, he bought himself a red Ferrari. Although he later appeared to lose interest in six-figure sports cars, he does have an Embraer SA private jet and is having a 105-meter-long (344-foot-long) yacht built for his use.

His most expensive passion is undoubtedly soccer. Since 2008, Galitskiy, who’s married and has a college-age daughter, has spent more than $300 million building FC Krasnodar.

The club’s proud owner, who pays millions of dollars to his players and rewards some with Rolex watches, was himself an avid soccer player. Born in Lazarevskoye, a suburb of the Black Sea resort of Sochi, Galitskiy once aimed to play professionally.

To give others that chance today, he funds Krasnodar FC’s soccer academy, a youth training ground.

The academy reflects the influence of another Galitskiy obsession: chess. As a teenager, he became a candidate master, three levels below grandmaster in the international classification system. Academy trainees are encouraged to play chess — to become clever in their thinking as well as fast on the field.

Having earned a finance degree at Kuban State University in Krasnodar, Galitskiy set up a cosmetics wholesale operation with college friends in 1994, three years after the collapse of the Soviet Union.

On his own, he opened his first store in November 1998. That was just three months after the outbreak of a Russian financial crisis that saw the government default on sovereign bonds. In a matter of weeks, the ruble collapsed 70 percent against the dollar.

Even so, Magnit thrived. Among consumer businesses, says Maria Kolbina, an analyst at ZAO VTB Capital in Moscow, “food retail remains the most resilient to challenges” — as underscored by Magnit’s near imperviousness to sanctions. Today, she says, the average Russian household spends about 38 percent of its income on food.

“The market was empty,” Galitskiy told Bloomberg News in 2012. “Once you found the right niche, there were unlimited opportunities to expand.”

Galitskiy’s expansionist ambitions weren’t always well received. In the late 1990s, mobsters fired a missile at his office from a grenade launcher, according to Magnit; on another occasion, he found a funeral wreath on his office door, an apparent threat from a local gang.

Russian business, like the government, is very centralized, and its owners and senior executives often gravitate to Moscow to be closer to the Kremlin. Galitskiy, however, is proud of his status as an outsider, preferring sunny Krasnodar, as he’s said, to Moscow’s grayness.

His experience has served him well, Prosperity Capital’s Westman says.

“I think the skills he learned from serving people who are not so wealthy proved useful in rolling out the company all over the country,” he says. “He may eventually become the richest Russian.”

With the gentle barbs he’s become known for, Galitskiy habitually plays the rube and pokes fun at Russia’s metropolitan elites. It wasn’t until last year that Magnit began an aggressive expansion into Moscow and St. Petersburg.

On a conference call with investment-banking analysts, most of them based in Moscow, he said, “You think Moscow and St. Petersburg are special, but there are other people who think they’re just regular cities. I’ve never been to St. Petersburg in my life.”

Running a vast operation like Magnit isn’t for the fainthearted, Galitskiy said in a 2010 interview with Russia’s Vedomosti newspaper. He said it’s “a common misperception” that retail is a simple business.

The reality is different, he said: “People who come to us get very surprised and don’t understand how on earth it’s possible to manage this.”

Galitskiy’s Krasnodar headquarters uses software of Magnit’s own design to monitor inventory levels across time zones, adjusting prices and deliveries accordingly. To reduce logistics costs, the company runs a fleet of almost 6,000 trucks. To avoid the whiff of corruption that permeates much of Russia’s business world, Magnit wires its purchasing managers up to lie detectors if it suspects wrongdoing.

“Magnit is probably the best-run company in Russia,” Westman says.

Will Magnit ever stop growing? Not anytime soon, judging from the numbers.

While Tesco controls more than 25 percent of the U.K.’s retail market, Magnit has just 6 percent of Russia’s. The top five Russian food retailers account for just 21 percent of the market. In the U.K. and Germany, the comparable figure is 60 to 70 percent.

By the end of 2018, according to company projections given to investors in September, Magnit aims to have 12,000 convenience stores, 650 hypermarkets and 4,500 cosmetics outlets. If those forecasts prove correct, Galitskiy will have plenty to celebrate each year when his birthday comes around.