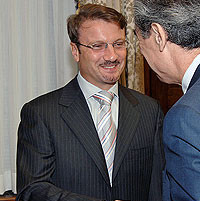 (Moscow Times – themoscowtimes.com – Alexander Panin – May 29, 2013) Though Russia has funds to finance infrastructure, it lacks project management experience to develop such projects and needs to borrow it from abroad, German Gref, the head of Sberbank, said at a business lunch for investors held by the Transportation Ministry on Tuesday.

The total cost of all tenders for road construction to be announced by the end of the year is valued at $5 billion, Transportation Minister Maxim Sokolov said.

One project to be announced this year is a tender for the construction of a 140 kilometer section of the M11 Moscow-St. Petersburg highway that connects St. Petersburg and Novgorod. The cost of the project is more than $2 billion. A quarter of the amount is meant to be private funds.

An even bigger project to be announced this year is construction of a 350 kilometer section of the M1 Belarus highway in the Moscow and Smolensk regions. More than $2.5 billion for the road is expected to come from private investors only, Sokolov said.

While the infrastructure improvement plans are long overdue, without the introduction of proper project management it will be impossible to complete them, Gref said.

“A project management culture is absent in Russia. If we were to ask representatives of large Russian companies whether they have fully adopted the core principles of project management, I am sure the answer will be unsatisfactory,” he said.

Gref cited reports on infrastructure development in other countries. Even the best examples in China, Spain, Germany and France show that by the time the project is complete the initial budget grows up by as much as 21 percent. On average, 41 percent of preliminary project documentation contains mistakes, he added.

“And we are talking about countries with a developed project management culture. Even 21 percent miscalculation in a $30 billion project is worth $6 billion, a huge amount,” Gref said.

But Russia should borrow experience from abroad because few large-scale infrastructure projects have been implemented, he said.

“We have little experience in infrastructure projects, and we cannot foresee and calculate possible deviations from the plan over such a long term ­ 35 years of project duration. And that is why we need to invite professionals from all over the world here,” Gref said.

Sberbank itself spends a lot of money to attract the best professionals on the world market and sends its own staff abroad to be educated there while having no luck in finding qualified personnel within the country, he added.

“Russia really needs Western technologies, as well as effective management. And we already see them coming. Part of the Moscow-St. Petersburg highway is being built with the participation of foreign firms, including France’s Vinci Concessions. And more [firms] should be invited because there are a lot of international companies that already have vast experience with infrastructure projects, ” said Anton Peshkov, head of corporate finance and infrastructure at consulting company KPMG.

These companies bring both project management experience and new construction and engineering technologies, which is one of the main goals of public private partnership in the first place, he added.

In order to attract private funds into government projects, new project management standards need to be introduced on the federal level, Gref said. Transparency and investor trust are to follow, he added.

As for financing, Sberbank is ready to support infrastructure projects in Russia.

“We can raise billions of dollars for these projects and invest our own funds in order to promote this process, even if the return on investment is relatively low. But we need to seriously think about how to create structures within the country which will help prepare such projects, attract private funds and to build up Russian experience,” the head of Sberbank said.

Meanwhile, an increase in competition between banks is also needed because it would reduce the cost of funding, Peshkov said.