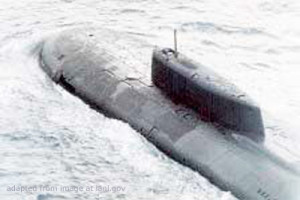 Fifteen years after one of the worst disasters in Russian naval history – the sinking of the Kursk submarine in the Barents Sea in which all 118 crew members died – the number of Russians who blame the authorities for not doing enough to rescue the sailors has dropped.

The tragedy occurred on Aug. 12, 2000, making it one of the first serious challenges faced by Russia’s new president Vladimir Putin. While at the time and in the immediate aftermath, the president’s actions were criticized, a poll published Monday by the independent pollster Levada Center showed that 40 percent of Russians thought the authorities did everything possible to save the crew – compared to 34 percent in 2010 and 23 percent in August 2000.

At the time, Russia’s rejection of offers of help from other countries elicited outrage among some members of the public. Attitudes to that position also appear to have softened: If five years ago, only 21 percent of respondents considered it the right decision, this year, 28 percent of people agreed with it.

In a fateful moment that would be remembered and criticized for years to come, Putin told CNN’s Larry King: “It sank” – and appeared to smirk – when answering a question about what had happened to the submarine during an interview on the television channel a month after the tragedy.

This laconic answer and the president’s demeanor were slammed as being cynical, indifferent and inappropriate for years to come, and further enraged those who already believed the government could have saved some of the sailors.

On Aug. 12, the Kursk, a nuclear submarine and one of the largest attack submarines ever built, was taking part in naval exercises in the Barents Sea. As the results of an official investigation later showed, one of the torpedoes the Kursk was carrying went off accidentally at around 11:28 a.m., followed by another explosion minutes later, after which the submarine sank.

Military officials only registered that an incident had taken place at 11:30 p.m., after failing to contact the crew numerous times.

The vessel was reportedly located at 4:30 a.m. the next day more than 100 meters below the surface. Attempts to rescue any possible survivors gripped the world’s attention for more than a week, but were ultimately unsuccessful: By the time Norwegian rescuers managed to open the submarine’s hatch on Aug. 21, everyone inside it was dead. Twenty-three sailors are now believed to have survived the initial blast for several hours before their oxygen ran out.

Putin’s administration was criticized for a lot of things – for waiting too long to start the rescue operation, for refusing assistance from other countries, and for the apparent lack of concern shown by Putin himself: The president only terminated his vacation in Sochi five days after the tragedy struck.

“They should have raised the alarm immediately. In only doing so at 11:30 [p.m.], they were several hours late,” Boris Kuznetsov, a lawyer who represented 55 families of the deceased sailors, told the Voice of America radio station last year.

Kuznetsov, who is now in his 70s, moved to the U.S. in 2007, fearing arrest after having published a book called “It Sank” that decried the authorities’ failure to save the survivors of the blasts.

The lawyer claimed that the explosion on the Kursk was recorded by a cruiser named the Pyotr Veliky (Peter the Great) that was nearby at the time. The cruiser’s crew also heard and recorded what sounded like the submarine crew banging on its walls, which sailors do in extreme situations to attract attention, the lawyer said.

The banging, Kuznetsov told Voice of America, continued until Aug. 14, so the experts’ conclusion that everyone had died from lack of oxygen eight hours after the tragedy, and that by the time the submarine was located there was no one to save, was deliberately falsified, because the authorities didn’t want to admit they were helpless.

“The U.K. sent an airplane with rescue apparatus, but it was prohibited from entering Russian air space. The Norwegians offered help. Everything was rejected. The real reason was fear of showing total inability to rescue people during extreme situations,” Kuznetsov was cited by Voice of America as saying.

In 2001, the hull of the submarine was raised from the bottom of the sea. A year later the official investigation concluded, naming the accidental torpedo detonation as the cause of the disaster.

That conclusion eliminated all the other versions – the submarine being attacked by foreign naval forces, a World War II-era underwater mine explosion, the submarine colliding with something in the sea – that had been circulating in the media for two years.

Not everyone accepted the results of the investigation. Some insisted that the Kursk had been attacked by a U.S. submarine and Putin had deliberately concealed it in order to avoid an international conflict.

Nevertheless, the case was closed and declared classified.

The bodies of 115 sailors were recovered and identified, several military officials were fired and all the crew members were posthumously awarded Orders of Courage. Their families received a total of up to 23 million rubles (about $700,000 at the time) in compensation from the authorities, the Moskovsky Komsomolets newspaper reported in 2003.