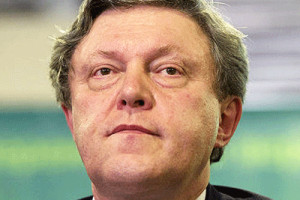 In the March 18 elections, Vladimir Putin “received a mandate to change nothing … not in the struggle with corruption, not in health care, and not in education,” Grigory Yavinsky says. Therefore, everyone lost the elections: those who voted for Putin,” those who voted for his opponents left and right, and those who didn’t vote at all.

Speaking to a forum on the prospects of Yabloko, the party he founded, the longtime opposition politician says the only ones who won out were those who exist as “parasites” on the system and use it to enrich themselves. The rich got richer, the poor poorer, and the Putin regime only exacerbated those two trends (echo.msk.ru/blog/yavlinsky_g/2188454-echo/).

And both the campaign and its outcome showed what the elections should have been about, he continues: changing the Putin system and improving fire safety so that Russians don’t die at a rate 12 times that of people in Western Europe and can go to the malls without fear for their lives.

Moreover, Yavlinsky continues, they should have been about establishing the inviolability of private property, the separation of power and business, and creating a system in which business will have an interest in taking care of their customers rather than simply following the dictates of their political bosses in order to get rich.