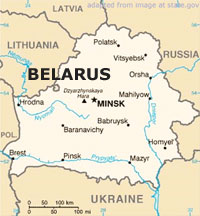 The EU is close to lifting sanctions on Belarus after its authoritarian president, Alexander Lukashenko, won a fifth term in polls on October 11 with 83% of the vote, making some concessions to the political opposition in the process.

While there hasn’t yet been any formal announcement of a limited sanctions suspension, individual ministers said it could happen quickly, with a lifting of visa bans and blacklists from as soon as the end of the month. “For the next four months, the decision is to suspend the sanctions,” said Harlem Désir, France’s Europe minister, the Financial Times reported. “But they can be reimposed immediately if this is justified.”

Whether this is an official EU decision remains unclear, with some commentators suggesting Désir was speaking for himself and not the EU as a whole.

However, a temporary suspension of sanctions would come as no surprise, as relations between Minsk and Brussels have been warming since June, as bne IntelliNews reported at the time. While Minsk remains heavily dependent on Moscow for anti-crisis loans, the talk of ending sanctions became explicit in August at a previous EU foreign ministers meeting after Lukashenko released a number of political prisoners as a gesture of goodwill.

“The decision of President Lukashenko on releasing jailed opposition leaders creates conditions for suspending the sanctions,” an unnamed diplomat close to the situation said in remarks quoted by Russia’s TASS news agency back on August 24.

Such a move would clearly be distasteful to some parts of Europe. Although this presidential election was not marred by violence like the previous vote in 2010, the Organization for Security and Co-operation in Europe (OSCE) said it did not meet international standards of fairness and transparency – a sentiment echoed by German Foreign Minister Frank-Walter Steinmeier, who said the elections weren’t perfect.

Yet the election was a test and Lukashenko seems to have passed it – although the bar was set pretty low: just don’t repeat the oppression that followed the last election. In 2010, his previous landslide victory was marred by the violent suppression of street protests in Minsk by citizens enraged that the vote had been rigged. This time around there was only a tiny protest in the main square in Minsk on ballot day.

“The elections are a test case for the possible development of our cooperation with Belarus,” said Steinmeier in a statement. “We expect that repressions such as those seen in 2010 will not be allowed to recur.”

The reason the EU is holding its nose and contemplating lifting sanctions is that it is playing Russia at its own game of divide and rule. Russian President Vladimir Putin has successfully introduced a great deal of division into the EU over his campaign in Ukraine by playing his cheap energy card and Russian credit largesse.

Brussels is now hitting back by attempting to drive a wedge into Putin’s Eurasian Economic Union (EEU) – a sort of anti-EU – which has been subject to tensions between its three founding members: Belarus, Kazakhstan and Russia.

And Brussels is being explicit about its gambit to weaken Putin’s economic alliance. “If we close the door to Europe, then Belarus’ future will have just one direction… Russia,” Polish Foreign Minister Grzegorz Schetyna said after an EU foreign affairs meeting in Luxembourg, EUobserver reported.

Closely watched for electoral violations, the election was also characterised by a poor showing of the cowed opposition.

Leading opposition candidate Tatiana Korotkevich garnered just 4.42% of the vote; the head of the little-known Belarusian Patriotic Party Nikolai Ulakhovich 1.67%; and the head of the pro-government Liberal-Democratic Party Sergei Gaidukevich 3.32%. Around 6% of participants voted against all candidates, the Central Election Committee (CEC) said, claiming an 87% voter turnout.

“I didn’t think that such a high proportion of voters would take part in ‘protest voting’,” CEC head Lidia Ermoshina said.

Lukashenko’s landslide secures him five more years as the republic’s only post-Soviet leader. The 61-year-old former state farm director came to power in 1994 in fairly free elections on an anti-corruption platform. Since then, his rule has become increasingly authoritarian, clamping down on civil society, the political opposition and independent media, and earning himself the reputation in the West as “Europe’s last dictator” – a moniker that European politicians have pointedly not been using recently. (Lukashenko once retorted: “better to be a dictator than gay”.)

Poll approval “would be good”

The legitimacy of the polls does not depend on recognition or non-recognition by other countries, CEC Secretary Nikolai Lozovik stressed during counting. But he said, “it would be good if the election is recognised by foreign organisations, as this is one of the components for the more successful international relations for the president-elect,” BelTA news agency reported.

However, an umbrella observer mission comprising the OSCE and other institutions said that while it saw “specific improvements and a welcoming attitude” in the polls, Belarus “still had a considerable way to go” in meeting its OSCE commitments to hold democratic elections.

“Some significant problems, particularly during the counting and tabulation of votes, undermined the integrity of the election,” officials of the OSCE Office for Democratic Institutions and Human Rights (ODIHR), the OSCE Parliamentary Assembly and the Parliamentary Assembly of the Council of Europe (PACE) said in a statement as results emerged.

Swedish MP Kent Harstedt, who led the mission, said in Minsk: “I was especially disappointed by shortcomings during counting and tabulation”. The ODIHR said the vote count was “bad or very bad” in 30% of the 169 counts it was allowed to observe. It cited “ballot box stuffing”, bogus voter lists, exclusion of some opposition candidates, and media bias for Lukashenko. “The campaign and election day were peaceful,” its statement added, while noting the need for “political will to engage in a comprehensive reform process” in Belarus.

The Belarusian practice of starting voting in the days running up to election day also still raises questions, with 36% of voters casting ballots since stations opened on October 6. This is to allow people who cannot make the main day of voting to still participate, but has in the past fuelled suspicions of vote rigging. The number of such voters broke earlier records: in 2010 just 23% of electorate took part in early voting.

Lukashenko has raised the spectre of what is happening in Ukraine taking place in his country as a means to pressure the EU into lifting sanctions.

The bloodshed in Ukraine has “shown how fragile peace is and that if you start doing thoughtless things here in Belarus, the country may ‘burst into fire’ as well”, Lukashenko said, according to the presidential media centre. “It is in the centre of Europe. Suddenly everyone has sobered up.”

However, opposition forces have denounced Lukashenko as merely a Russian puppet. “This process [of lifting EU sanctions] will take more than a day,” political activist and prominent poet Vladimir Nekliaev said during an anti-government rally the day before the election that drew around 900 people. “But let’s ask, what will [Lukashenko] do in Europe? He will deliver a lecture written in the Kremlin… He will be the mouthpiece of [Russian president Vladimir] Putin,” said Nekliaev, who also ran for the presidency in 2010 and was detained on election night.

Putin was the first foreign leader to congratulate Lukashenko on his re-election, saying on October 12 that his “decisive victory” indicates his “high political authority and trust from the population”. Putin said the Kremlin’s strategic ally on Russia’s western boarders will strengthen the “Belarusian-Russian strategic partnership”.

The Russian leader faces tricky negotiations with Lukashenko in the coming months over Moscow’s wish to establish an air base in the Belarusian city of Baranovichi. This presents Minsk with a strong opportunity to profit from giving its consent, including eliciting cash injections into the still heavily state-dominated and recession-plagued Belarusian economy.

Lukashenko has been cagey over the issue in recent days in an apparent bid to strengthen his bargaining position, saying: “We don’t need any bases,” and that Belarus instead needs Russian up-to-date air defence systems.