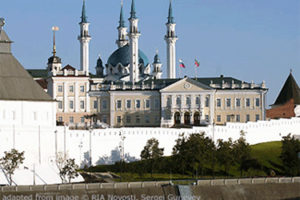 “This is outrageous. The mildest words here are: it’s absolutely stupid. This is direct connivance with the law enforcement agencies; the Tatarstan authorities have never been notable for intelligence policies, and this is perplexing,” Pamfilova said on the Echo of Moscow radio station on Tuesday.

She said she would “thoroughly analyze” the situation within her purview.

Nationalist Dmitry Dyomushkin had told Interfax earlier that PARNAS party members Vyacheslav Maltsev and Dmitry Ignatyev, who are running for the State Duma, were detained by law enforcement officials at the entrance to Kazan.

“Vyacheslav Maltsev told me they were detained while entering Kazan,” Dyomushkin told Interfax. He said law enforcement officials blocked a bus in which, apart from Maltsev, PARNAS candidate Dmitry Ignatyev and four other people were also riding.

The PARNAS candidates were supposed to meet with voters in Kazan at 7:00 p.m., but the meeting was disrupted. Maltsev cannot be currently reached on the telephone, Dyomushkin said.

Interfax could not immediately obtain official comments on the situation from law enforcement agencies.