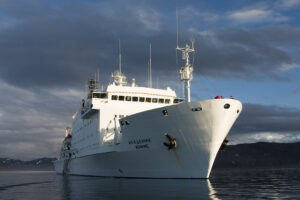 Danish authorities have detained a Russian research vessel north of the Jutland Peninsula in an apparent legal dispute, representatives from both countries have confirmed.

The Russian Embassy in Copenhagen on November 4 said the ship, Akademik Ioffe of the Shirshov Institute of Oceanology from the Russian Academy of Sciences, was detained on November 1 while refueling at the port of Skagen.

The Russian news agency RIA Novosti quoted the embassy as saying that 61 people were on board of the vessel.

The embassy said the seizure of the vessel was carried out as an interim measure as part of a dispute with a Canadian company relating to the previous activities of the Akademik Ioffe.

“The vessel is flying the Russian flag, is owned by the Russian Federation, and is used by the Shirshov Institute of Oceanology for scientific purposes,” the Russian Embassy said.

The Danish Navy and Foreign Ministry could not immediately be reached for comment.

The Russian Embassy said in a Facebook post that it had received a court order and forwarded it to the Foreign Ministry in Moscow.

“The embassy received and transferred to the Russian Ministry of Foreign Affairs copies of the court decisions on the basis of which the arrest was made. Employees of the Russian Embassy are in contact with the Danish Foreign Ministry on this issue,” the posting said.

“The Foreign Ministry is aware of the matter and can confirm that we are in contact with the Russian Embassy,” Denmark’s authorities told the dpa news agency.

Russian media said the ship had in the past taken paying tourists on board in order to earn additional income to pay for its research activities.

But the reports said the policy had stopped and the ship was no longer being used commercially, leading a Canadian partner to demand millions in damages.

The Russian Embassy did not confirm this.