YEKATERINBURG. Oct 28 (Interfax) – The Russian television presenter Ksenia Sobchak, who has decided to run for presidency in 2018, says that Crimea must hold a new independent referendum.

“Russia violated its international obligations, that’s the main starting point. There are Russian people living in Crimea, many of them. (…) We cannot treat them as subjects of geopolitics. That policy is bad which is not for the people,” Sobchak said at a meeting with journalists and supporters in Yekaterinburg on Friday. 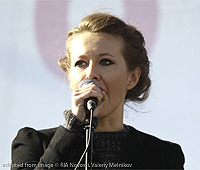 “I can see a way out from the crisis and unfair situation through a new referendum, which implies various points of view,” Sobchak said.

She will not be campaigning in Crimea, she said.

Crimea is Ukraine’s from the perspective of international law, Sobchak said earlier.

Crimea became part of Russia after the republic held a referendum in March 2014. Ukraine refuses to recognize its results, considering the peninsula to be its own, if temporarily occupied, territory. The European Union countries and the United States have called Russia’s actions the “annexation” and imposed sanctions on a number of companies, politicians and business people.

[Sobchack image is file photo from another occasion]