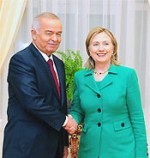 WASHINGTON, January 30 (RIA Novosti) The United States and Europe should work to persuade Russia’s leadership to let their country become more “integrated” with the West despite challenges in relations with Moscow, outgoing US Secretary of State Hillary Clinton said in an interview published Tuesday.

“It’s going to have to be a mutual effort, Europe and the United States both bilaterally and together, working to try to persuade Russia and particularly Russian leadership that they should become more integrated into and connected with Europe and the West,” Clinton said.

“That’s where the future lies, and we hope that the next few years will be more successful doing that.”

Clinton, 65, said the United States has a “very important bilateral relationship with Russia” that had yielded tangible progress in areas ranging from nuclear disarmament to security in Afghanistan and other areas of mutual interest.

But in the interview with several foreign media outlets, Clinton added that it was important for the United States to work with Europe and for Europe to work directly with Russia “to make sure that we try to shape and create a positive relationship with Russia.”

“I will admit it is challenging right now,” Clinton said, noting that Russia had recently shut down all US government aid programs in the country. She cited in particular programs to help fight tuberculosis and to assist abused children.

Russian President Vladimir Putin and other leaders have long accused the United States of using aid programs to promote Washington’s political agenda there. In closing down these programs, Russian leaders also stressed that the country is back on its feet economically and no longer needs this help.

Clinton plans to step down as secretary of state within days and will be replaced by Senator John Kerry, who was confirmed by the US Senate on Tuesday and will be sworn in later this week.