Clinton Should Listen to Russian-Americans 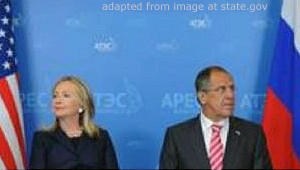 The willingness of Hillary Clinton campaign’s to suggest that Russia has interfered in the U.S. presidential election — in the form of President Vladimir Putin’s supposed help for Donald Trump — exposes the weakness of the Democratic candidate’s presidential bid. The campaign is wasting ammunition on loud but inefficient accusations, instead of looking for avenues of attack that would let her pull ahead.

Much has been written about Putin and Trump, with the cooperation of Clinton staffers who would like the world to know that the Democratic National Committee’s computer network was compromised by Russian government-sponsored hackers. The Clintonites wouldn’t be so eager if they didn’t believe that associating Trump with Putin could score a few points with the voters. Yet it isn’t clear that ordinary Americans will care one way or another, and those for whom Putin is the very real authoritarian leader of the country of their birth are either irritated or amused.

Putin is not a popular figure in the U.S. Last year, a Pew poll showed that only 21 percent of Americans had confidence in the Russian leader. Yet both Clinton and Trump aren’t doing so well, either. In May, a poll commissioned by the Wall Street Journal and NBC showed that 44 percent of Americans had “very negative” views of Trump; Clinton came second, with 41 percent, and Putin trailed them both, with 38 percent. If many Americans consider Trump and Clinton worse than Putin, linking one of them to the Kremlin ruler doesn’t make much electoral sense.

There is, however, a group of U.S. voters that cares about both Putin and the U.S. presidential candidates: Dual citizens, those who can vote in both Russia and the U.S. I have talked to a dozen of them, none were strong Trump supporters (his backers in traditional Russian immigrant areas often like Putin, too, so the linkage would only fortify their resolve to vote Trump). And their reactions to the hacking allegations ranged from disbelief to indifference.

“I’m not sure these leaked e-mails are the hand of Moscow,” said Max Volovik, a movie producer and investor who divides his time between Moscow and New York and plans to vote for the libertarian Gary Johnson. “And even if this were indirect help, it wouldn’t affect anything. If Putin could force Hillary to eat children, it might.” The Democrats, he said, are “crazy” to pursue the conspiracy theory: “They must have caught some virus from Trump.”

“The hackers could have been of Russian origin, lots of them are,” said Lara Troyanovsky, a TV executive. “It would be a serious international scandal, so why would Putin risk it?”

Troyanovsky, who always votes Democrat, says she may not vote for the first time because neither of the major candidates appeals to her, and Johnson “isn’t going anywhere.”

Even those who say they believe Putin may be consciously aiding Trump don’t believe that the exposure will help Clinton.

“I don’t think a Putin connection would push away Trump supporters,” says Natasha Fadeeva, a chemist at a cosmetics company in New Jersey. “The Democrats ought to focus on the economy instead.”

These are all people who know far more about Putin than the average American, and who are not sympathetic to him. The real-life Putin — as opposed to the media caricature — has forced them to report their double citizenship to the authorities, and he treats them as potential traitors. Yet even they are left cold by the Democrats’ attempts to tie Trump to Russia.

“You are losing me,” Tatyana Malkina, a Moscow journalist who is a dual citizen, wrote of the Democrats in a Facebook post. “It’s really close and Trump can very well win, not because Putin prefers him, but because the so-called average American — who doesn’t give a damn about Putin Schmutin — may prefer him. And you’re not helping.”

Julia Ioffe, a U.S. journalist of Russian extraction, pointed out another problem with the Clinton campaign’s Putin gambit in a column in Foreign Policy on Monday:

“The very fact that we are discussing this and believing that Putin has the skill, inside knowledge, and wherewithal to field a candidate in an American presidential election and get him through the primaries to the nomination means we are imbuing him with the very power and importance he so craves. All he wants is for America to see him as a worthy adversary. This week, we’re giving that to him, and then some.”

Putin likes blaming setbacks on external enemies. Ask him about corruption or Russia’s recession and he’ll point to the hostile West. Instead of addressing Clinton’s negatives — the huge fees she received for speeches that still haven’t been released, the e-mail scandal, the recent revelations that the supposedly neutral DNC backed her to the detriment of Bernie Sanders — her campaign may be following a similar path.

Clinton and her staffers ought to listen to Russian-Americans who aren’t buying it from Putin and won’t buy it from her, either.

[featured image is file photo from past occasion]