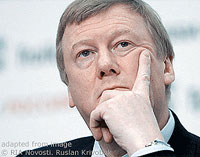 “In Chubais’ entourage, it has now turned out, CIA officers worked as consultants,” Putin said at a live Q&A session with the Russian public.

Putin also said “intelligence officers” had been prosecuted in the United States for illegally “enriching” themselves “during the course of privatization in Russia.”

He gave no further details.

Putin also said “many mistakes” had been made during the controversial privatization of Russia’s post-Soviet economy, but praised Chubais and the other reformers for their “courage” in taking the measures they deemed necessary.

Russian media reports have accused two members of the USAID project to advise the Russian government on its transition from the Soviet econmoy to capitalism – Andrei Shleifer, a Harvard economics professer, and Jonathan Hay, a Harvard-trained lawyer – of being CIA officers. There is nothing in the public domain to suggest either man was employed by the CIA.

Both men were accused by the US government of making illegal personal investments in Russia during their work in Moscow.  In a settlement reached in 2005, Harvard agreed to pay $26.5 million, and both Hay and Shleifer were hit with fines. Both denied the charges against them.