By Hook Or By Crook: For The Opposition In St. Petersburg, Winning An Election Is Only The Beginning Of The Battle 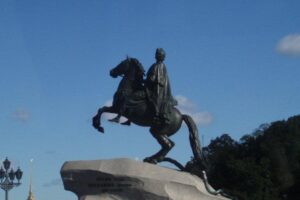 Sergei Vinichenko, who has served as an independent deputy on a St. Petersburg district council since 2014, was deprived of his mandate in October for purportedly failing to submit a mandatory declaration of his assets.

Vinichenko told RFE/RL that he carefully put all the required documents in the mail in the spring. When he left for his summer vacation, a letter arrived warning him that the documents had not been received.

“The district council convened instantly while I was on vacation,” he told RFE/RL. “They quickly decided to revoke my mandate based on a letter from the District Development Committee that should have been considered merely informative.”

Under normal circumstances, a deputy receiving such a letter should be given time to submit the documents or to explain why they were not filed on time.

“But, here in St. Petersburg, the United Russia party has long treated deputies from other parties or independents very poorly, trying by any means to hinder their work or to find any excuse to strip them of their mandates,” Vinichenko said. United Russia is the Kremlin-controlled party that dominates governments and legislatures nationwide, acting as a lever of power for President Vladimir Putin.

Sergei Alekseyev, a former Communist deputy from another district in St. Petersburg, which is Putin’s hometown, was also deprived of his mandate after the postal system seemingly lost his documents. Officials refused to accept his papers after he sent them a second time and, by a party-line vote with all the United Russia deputies voting in favor and the four non-ruling party deputies voting against, the council sent Alekseyev packing.

Russian Central Election Commission Chairwoman Ella Pamfilova said after the election that local lawmakers from United Russia, including Legislative Assembly speaker Vyacheslav Makarov, had “directly intervened in the electoral process” and caused “irreparable damage to the authority of the elections and the United Russia party.”

“It is almost as if there were no authorities in St. Petersburg at all,” Pamfilova concluded. “[The United Russia officials] could get away with anything they wanted.”

Nonetheless, in part because of the newly launched Smart Voting strategy that opposition leader Aleksei Navalny introduced, urging voters to cast their ballots for the candidates most likely to defeat their United Russia rivals, the ruling party’s share of municipal council seats fell from 77.8 percent to 61.4 percent. Opposition and independent deputies nearly doubled their representation. A total of 259 independent candidates won seats at the table.

Two women take a photo with Russian opposition politician Aleksei Navalny after he voted in the Moscow City Duma elections.

Now, however, many of them say United Russia is taking its revenge, using an array of underhanded tactics to intimidate or remove them.

“The fact that United Russia is acting in this way smells like some sort of cartel arrangement,” former municipal deputy Alekseyev told RFE/RL. “Like some sort of mafia structure because, whenever they get together, they change their ideology and start acting like an organized-crime gang.”

Independent district council deputy Anna Karulicheva found out in July that her asset declaration was being audited. The news came shortly after she and an independent deputy from another district, Svetlana Utkina, complained to prosecutors that district councils throughout the city were paying an illegally excessive number of staff members.

“When I was a candidate, they tried to remove me from the race on the eve of Election Day,” Karulicheva told RFE/RL. “I haven’t been invited to a council meeting since December. Because of that I have sued twice, but the city does not respond. I complained to prosecutors that they don’t respond to my suits and the head of the council has been fined. They have written her up 15 times. The fine is small, but 15 fines is not a pleasant thing.”

Utkina’s asset declaration is also under audit and she fears she will soon lose her mandate as well. She told RFE/RL that auditors accused her of improperly indicating her salary as a deputy after taxes. They also reportedly found an undeclared inactive savings account in her husband’s name that had a balance of zero rubles.

District council deputy Sergei Kuzin, of the A Just Russia party, is also facing an audit, which he says was ordered personally by St. Petersburg Governor Aleksandr Beglov, the local leader of United Russia.

“They started the audit for several reasons,” Kuzin said. “First, I was the chairman of the commission for choosing a district manager for the Gavan District. This is revenge for the fact that I ran the competition honestly rather than the way they ordered it held. Second, there is my opposition activity as the coordinator of the St. Petersburg branch of Open Russia. I think United Russia people in [the governor’s office] don’t like this.”

He notes that, in 2021, there will be elections both for the Russian State Duma and the St. Petersburg Legislative Assembly.

“Maybe they want to take away my mandate as a start to that campaign,” Kuzin said.

A Just Russia district council deputy Viktor Mager was deprived of his mandate for allegedly filing his asset declaration after the deadline. He maintains that he handed in the documents on time, but that they were not registered because the necessary officials were not working due to the coronavirus lockdown.

The documents were due on March 27, but were only accepted by officials on April 3, the first working day after a government-ordered lockdown.

Mager maintains that he was targeted because he played an active role in a campaign called Nyet! to urge Russians not to support a Kremlin-initiated package of constitutional amendments in a nonbinding plebiscite held in June and July. Among other things, those amendments enable President Vladimir Putin to seek up to two more terms as president and potentially remain in office until 2036.

An opposition supporter, wearing a protective face mask and a T-shirt with a modified image of Russian President Vladimir Putin, attends a protest against the constitutional amendments in central Moscow on July 1.

“All the members of the Nyet! office got some sort of ‘little gift’ — some of them lost their positions, some of them had their homes searched,” Mager said.

In January 2018, the Russian branch of the Transparency International anti-corruption group published research showing that, in 2017, 56 of St. Petersburg’s 111 municipal districts had not published deputies’ asset declarations as required by law.

“We found that many deputies and municipal officials systematically ignore the obligation to declare real estate that they control: 121 officials did not declare any real estate at all that was either owned or used by them or their families,” the report said. “Nine people declared the income of their entire families to be zero rubles.”

Aleksandr Shurshev, a lawyer with Navalny’s St. Petersburg office, said that, despite the massive violations, the process of auditing officials has been highly selective.

“Audits are initiated only by the governor responding to a request (either from a local council or the mass media or a political party or a state agency),” Shurshev said. “But the decision to start an audit is made by the governor. We can see that only those deputies who are not liked by United Russia or the governor’s office get audited. No one knows if United Russia deputies ever get audited. We also do not know who requested the audits that do get carried out.”

Anton Sheinin, a local coordinator of the election-monitoring group Golos, agreed, saying the audits that are conducted have nothing to do with corruption and everything to do with politics.

“They are necessary to keep deputies in line,” Sheinin said, “so that they can be easily manipulated.”
Your copy should address 3 key questions: Who am I writing for? (Audience) Why should they care? (Benefit) What do I want them to do here? (Call-to-Action)

Create a great offer by adding words like “free” “personalized” “complimentary” or “customized.” A sense of urgency often helps readers take an action, so think about inserting phrases like “for a limited time only” or “only 7 remaining!”