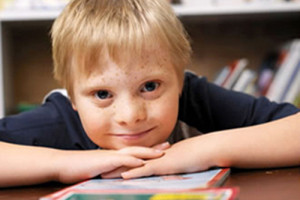 There are some 2,500 babies with Down’s syndrome born in Russia every year. Many of them are abandoned by their parents at birth. However – mainly thanks to volunteer movements – society is now developing a more enlightened view of the condition, with some ordinary schools offering a special curriculum; in Moscow there is even a theater company made up of actors with Down’s syndrome.

A mere 20 years ago, 95 percent of Russian families would give up babies born with Down’s syndrome. “Previously, many people did not know where to turn to for help, how to bring up these children, whether they would be accepted into a kindergarten or school,” says head of the press service of the Downside Up charity foundation, Yuliya Kolesnichenko.

“Now the situation has changed. For example, in Moscow, some 50 percent of these babies remain with their families. Statistics vary for different regions. For instance, in the Sverdlovsk Region [in central Russia] in 2014 only 6 percent of babies were abandoned. There are, however, regions where 85 percent of parents leave their Down’s syndrome babies behind in hospital after they are born.”

Nor do the prospects of adoption for these children give cause for cheer. According to official statistics, in 2013, Russians adopted 6,757 children, only 64 of whom were disabled. A further 1,488 babies were adopted by foreign families.

“The adoption of children with Down’s syndrome used to happen very rarely,” says Kolesnichenko. “Now, these adoptions do take place, even among our staff.”

She points out that while in recent years the situation has been improving, “the Dima Yakovlev law that banned U.S. citizens from adopting children in Russia has had a serious effect, because often that was the only opportunity for a Down’s syndrome child to get a new family.”

One of the main problems is a lack of awareness and understanding. In those regions where there are foundations working with parents and helping families to raise children with Down’s syndrome, the number of abandoned children is much lower, Kolesnichenko explains.

“When our foundation was set up 18 years ago, the media did not want to write about Down’s syndrome, and celebrities who had children with this condition were hiding them from public view. Now myths about the syndrome are being dispelled and society is getting used to them,” she says.

In 2012, Russian actress, TV presenter and public figure Evelina Bledans revealed in an interview that her newborn son had Down’s syndrome. Bledans and her husband learnt of the diagnosis during her pregnancy and decided to keep the baby. “My husband and I view it as a mission. We are dealing not only with our son but with other kids too,” Bledans said.

Her son Semyon goes to an ordinary kindergarten with other children. Previously, there was just one kindergarten in Moscow that admitted children with Down’s syndrome. Now, under the new laws, all kindergartens and primary schools must do that, explains Yuliya Kolesnichenko. “However, in reality, not all of them do because not all of them have the necessary specialist staff, speech therapists, psychologists, etc. At the same time, new dedicated special schools have emerged.”

Several ordinary schools offer partially differentiated classes: children with Down’s syndrome attend some lessons with the rest of the class and some separately, following a special curriculum. “However, the most difficult question is what happens next,” says Kolesnichenko.

A long way to go

“Legislatively, the issue of employing people with Down’s syndrome has not been resolved in Russia. In the whole of the country, only two such people are employed. Maria Nefedova works with us as an assistant teacher and Nikita Panichev works as a cook in a Moscow restaurant.”

There is also a theater in Moscow where actors with Down’s syndrome perform, although they do not get paid for it. Yet, they hope that this is just the beginning of their acting careers. Thanks to his famous mother, little Semyon is taking his first professional steps too.

“For a third year already, my son and I have been Pampers ambassadors in Russia. We have also advertised a joint collection of clothes. Semyon is photographed for magazines, he takes part in various programs, he is always with me and the public love him. It so happened that it was our family that helped to change people’s idea of these children,” says Evelina Bledans.