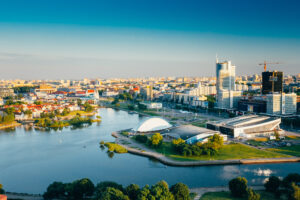 Once Alyaksandr Lukashenka is ousted from power, Belarus would find it far easier to become a normal European country than Ukraine seeking the same thing has, Vladislav Inozemtsev says, something that restrains Moscow from seeking his ouster precisely because it would give the West such an enormous opportunity.

The Russian economist says that transforming Belarus in that direction would be “much easier than the analogous transformation of Ukraine because of its closer ties with neighboring Poland and Lithuania, its relatively smaller economy, and its lack of the kind of powerful oligarchs Ukraine has (theins.ru/opinions/inozemtsev/242333).

Indeed, Lukashenka could remain in power only if Vladimir Putin is prepared to sacrifice much treasure and his reputation in the West or if the Western countries, newly energized against him, prove to be indecisive or fail to remain united in their goal of getting rid of what they call “the last dictator in Europe.”

The Kremlin faces a difficult choice: “either it can refuse the salvation of its unsuccessful ally … in the name of a more effective defense … or it can sharply increase its forces there and carry out a struggle which could become no less dramatic than in Ukraine where Russia already has overrated the strength of its friend and underrated the decisiveness of its opponents.”

Lukashenka’s meeting with Putin on Sochi shows, Inozemtsev continues, that “Moscow still does not intend to take decisive steps;” but with each day, the costs of not doing so increase and its possibilities for a successful policy in the Western direction decline in number not only in Minsk but in the West as a whole.

Lukashenka’s last meeting with Putin showed the Russian leader is frustrated with his Belarusian counterpart and is no longer prepared to provide him with anything like the assistance Lukashenka has sought. This time, he needed some seven to eight billion dollars in credits but took away only 500 million.

According to Inozemtsev, it is ever less likely that Putin will seek to absorb Belarus into the Russian Federation. That would only change a foreign policy problem to a domestic one and might make both worse given the reaction of the West and the likely reaction of the Belarusian people.

Instead, the Russian economist suggests, “Putin now conceives of Belarus as an ally in opposing ‘the collective West,’ exactly the same way Lukashenka characterizes his role.” But neither leader has taken into full account how much has changed since last August’s presidential vote and the forced landing of a plane in Minsk so Lukashenka could arrest an opponent.

“The first of these deprived Lukashenka of legitimacy in the eyes of a large part of the world, and the second opened ‘a war for destruction.’” Sanctions against Belarus are now coming thick and fast, undermining Lukashenka but also increasing the costs both direct and in terms of image for Putin.

“Today,” Inozemtsev says, “the position of ‘the collective West’ is strategically stronger than that of Russia.” Belarusians are tired of Lukashenka, and the West is pleased to go after him because attacking the Minsk dictator compensates for its not having adopted a tougher position against his Moscow ally.

In this situation, Moscow lacks “a Plan B.” Of course, “it could continue to provide assistance to Moscow out of the public eye, but this would not smooth ties between Lukashenka and the east or between Belarusian society and the West.” And that means that the problems now so obvious would only intensify with time.

The Kremlin hasn’t figured out how to respond to sanctions policies, in part because it may benefit somewhat in the short term but not longer because ever more Western governments will see the connection and draw the obvious conclusions. What that means is that if Lukashenka does go, the West will win “a crushing victory” in shifting Belarus away from Moscow.

Over the last two decades,” Inozemtsev argues in conclusion, “Lukashenka has methodically made Putin the hostage of his policies … but now the Belarusian dictator has become a victim of his own success.” He has alienated the West at a time when the East is thinking about a new deal with the West.

“More than that, “today Europe and the US, albeit for different reasons, have begun to doubt” about whether they can bring Ukraine into the West and so they have even more reason to look to Belarus for a victory that would help them both domestically and internationally, the economist says.