Re: Churchill and War with USSR 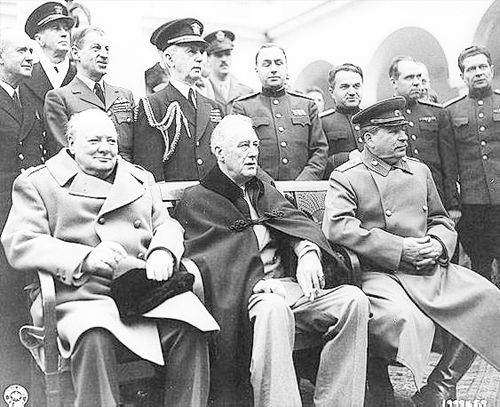 In May 1945 before he knew about the atomic bomb, Churchill asked the British General Staff under Field Marshal Alan Brooke to do a study of a possible war between attacking British, US, German, and Polish forces against the USSR with a start date of 1 July 1945. The staff did their sums putting 96 Allied divisions up against 262 Soviet divisions in a fight over eastern Germany and what became Western Poland. [How exactly the rearmed Wehrmacht and the Free Polish forces would have operated was not discussed in the study. It did, however, assume that no US Army negro units would be employed.] The staff concluded that it would be a very bad show and likely turn into a protracted war, which Britain could not afford. The planners gave the staff exercise the name,”Operation Unthinkable,”

By late May the idea was overtaken by events. US forces were leaving Germany to finish up the war in the Pacific. At the same time 30 Soviet divisions were also moving in the direction of Manchuria to deliver what Stalin had told Harriman and General Deane in October 1944 would be a blow “to break the spine of Japan” as the Americans struck at the head.

At Potsdam, when Churchill heard about the successful test of the plutonium bomb from Truman, he said to Alan brooke that the bomb made all the difference regarding the settlement in Europe. Now if Stalin did not tow the Anglo-American line your could threaten Minsk with instantaneous atomic destruction and if that did not do the trick then Kubyshev, Stalingrad, and Moscow. This is not 1947 but 1945. In the summer of 1944 the British General Staff had already begun to plan on the assumption that the Soviet Union would be a probable opponent in the post-war era.