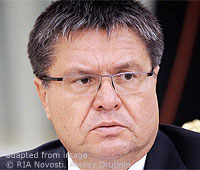 The Economic Development Ministry expects that Russia’s GDP will fall less fast in the fourth quarter than it did in the third, Economic Development Minister Aleksey Ulyukayev announced at a meeting with entrepreneurs from Baden Wuerttemberg in Moscow on 11 November. RIA Novosti news agency quoted him as saying that the economy was expected to start to grow from the second quarter of 2016.

“My understanding is that we went through the low point somewhere in June-July this year. From July the seasonally adjusted dynamics from month to month does not show faster fall, September-October show small increase and the lowest point was GDP falling about 3.8 per cent in the third quarter. It will not deepen any further. The fourth quarter will also be a little better than the third,” RIA Novosti quoted Ulyukayev.

Earlier Deputy Economic Development Minister Aleksey Vedev told RIA Novosti that the ministry expects the annualized contraction of the economy to be 3.8-3.9 per cent in the fourth quarter compared with 4.3 per cent in the third quarter.

Ulyukayev also confirmed that the Economic Development Ministry expects Russia’s GDP to start growing from the second quarter of 2016. “Thanks to the constant revival of consumer spending, first of all thanks to the rebuilding of the reserves of businesses and then thanks to resumption of investment activities,” RIA Novosti quoted the minister as saying.

Ulyukayev noted that an indirect indicator such as PMI (Purchasing Managers’ Index) was above 50 per cent. “This suggests that businesses start to perceive the situation as acceptable… The fall in investment has slowed down a little… We didn’t even expect this. To be frank, we expected that investment would be the last to recover. However, it started to return a little faster than we thought,” Ulyukayev said.

He noted that the inflation was still high in Russia. “It will now start to fall quite fast because it was affected first of all by exchange rate movements and the devaluation and it is, in turn, dependent on the dynamics of oil prices. Both of them are at present in a stable state,” the minister said.