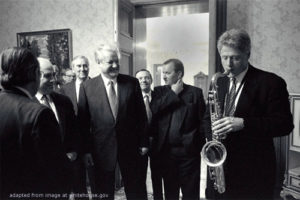 “Against the backdrop of an enormous power differential between their two countries, Clinton and Yeltsin established a close personal rapport. … to interact effectively even when … frank in their disagreements, the most serious of which were over NATO enlargement … and the Kosovo War …

As many were decrying the lack of any formal record of the one-on-one meeting between … Trump and … Putin in Helsinki, the Clinton Presidential Library in July posted online nearly all of the declassified memoranda of conversation (“memcons”) from the in-person meetings and telephone conversations (“telcons”) between … Bill Clinton and … Yeltsin from Jan. 23, 1993, to Dec. 31, 1999, when Yeltsin abruptly resigned from office and made way for Putin. With 18 memcons and 56 telcons available through the library’s website, it is possible to view directly the key discussions between these two leaders over time, from the early days when Clinton publicly backed Yeltsin in his bloody political standoff with the Russian parliament to their later disagreements over NATO enlargement and Kosovo, along with numerous conversations about arms control, Chechnya, Iran, and other global issues. … First, the two leaders established a close personal rapport … to interact effectively even when they were being frank in their disagreements …. Second, the two men used their meetings and phone calls to build trust … by explicitly referring to delivering on promises made in their prior conversations. … Third … Yeltsin’s Russia was extremely weak, a country in economic free-fall and strategic decline. Clinton’s America was enjoying its unipolar moment.[] In no other era before or since has the Russian president been in such a weak position when meeting with his American counterpart …. The meetings largely consist of Yeltsin agreeing to Clinton’s requests after some back and forth. But also clear is Yeltsin’s desire for Russia to be seen as an equal ….”

Click here for: “Bill and Boris: A Window Into a Most Important Post-Cold War Relationship” – Texas National Security Review/James Goldgeier

[featured image is file photo, not directly related to original post of article]