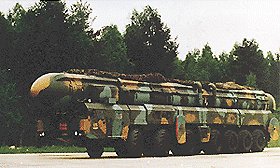 “It is necessary to have about 1,500 nuclear warheads in the shock troops of the Russian strategic nuclear forces in order to resolve tasks of strategic deterrence. The United States have approximately the same number,” Karakayev said on the occasion of RVSN Day celebrated on December 17.

This number is needed if one takes into account the approximate equality of warheads in the Russian Strategic Missile Troops and the U.S. strategic offensive forces and with consideration of “the level of strategic forces of other nuclear powers – the United Kingdom, France, China and nuclear weapons of new nuclear powers – India, Pakistan and others,” Karakayev said.

“The quantitative parameters of the strategic offences forces of Russia and the United States are stipulated in a new agreement on decreasing the strategic nuclear weapons,” Karakayev said.

“I will not give the exact numbers of rockets and warheads within the U.S. strategic offensive forces. I will just note that their quantitative decrease has been compensated by a comprehensive modernization and further improvement of rocket and special weapons of the entire strategic triad by giving them new qualities and characteristics. And Russia is aware of this,” the general said.

“As to nuclear forces of the UK, France and China, their development by the countries’ military and political leadership does not depend on the negotiating process of Russia and the United States on nuclear disarmament,” Karakayev said.