Interfax: Poroshenko will not agree to peace in exchange for Ukraine’s sovereignty and integrity 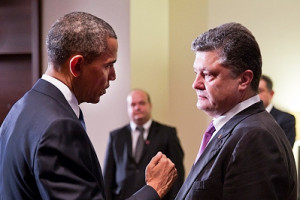 (Interfax – August 25, 2014) Ukrainian President Petro Poroshenko has said that peace in the zone of the armed operation will not be achieved at the expense of Ukraine’s sovereignty or territorial integrity.

“Steps to peace cannot be unilateral. They should not be taken at the expense of the sovereignty, territorial integrity or independence of Ukraine,” he said at festivities on the 23rd anniversary of Ukraine’s independence in Kyiv.

He said Ukrainian diplomacy is doing “everything possible and impossible” to find a political way of settling the situation the east of the country.

He said that the conflict has spilled beyond bilateral relations “and threatens European and global security.”

“The centennial of World War I was marked less than a month ago. The third one must not be permitted,” Poroshenko stressed.